Our first release as part of Nottstoppingfestival.com May 21, 2020

Anteloup are really proud to have our song 'My Friend' on the Notts Very Long Songs album of 30-second songs, part of Nottstoppingfestival.com.

Our song and the whole album are available to buy online, and all profits will go to helping key workers. The video was shown on Nottstoppingfestival.com's live stream.

Songwriter Pat Hylton tells us more about the inspiration behind the song:

The song is about the fact that we have physical distancing, but we don’t have to be social or psychological distant. The words “Don’t be afraid, please pick up the phone, please believe me, you’re not alone”, recognises that while the present situation is unprecedented and things are unknown, we need not be afraid as there is help, compassion, empathy. This is displayed both in our essential workers and our communities. The video reminds us of this as the community comes together to sing, and those voices lift us up to know “we will work it out”, because we are “friends”. As with all troubled times, the differences between us will be our strength to overcome and resolve (the rainbow). We wanted to write something uplifting, reflective and simple like Bob Marley’s ‘Three Little Birds’.

We've also launched our online shop! As well as all your Anteloup t-shirts, mugs and tote bags, limited edition "My Friend" merchandise is available. Anteloup's profits until the end of June on the My Friend items will be donated to the Nottstopping Festival fund for keyworkers. 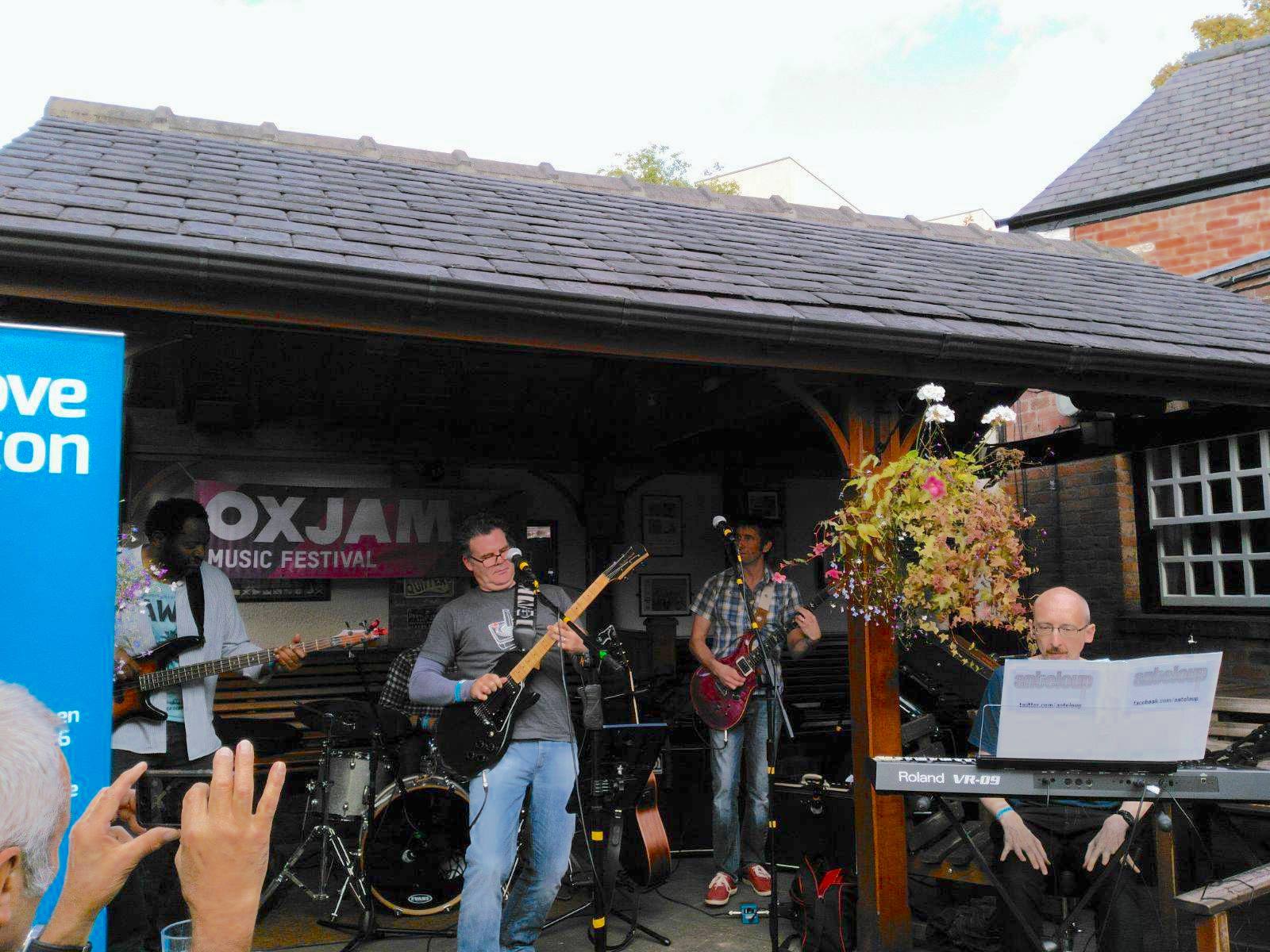 October's looking to be a busy month for the band, with Oxjam Beeston Takeover 2019 landing on the 19th and a mixed set confirmed at the Barton's Garage Street Food Smoke Up event on the 26th.

The Oxjam Beeston Takeover is a truly fantastic event with over 100 music acts performing at nearly 20 venues over a 12-hour period from midday to midnight. This event constantly raises tens of thousands of pounds for Oxfam and is music-lover's heaven!

The boys will be playing the legendary Hop Pole at 8.50pm. so you'll need to buy a ticket, which will get you into every venue.

The Barton's Garage Street Food Smoke Up returns at The Garage, Chilwell, with a multitude of street food vendors providing the very best in world cuisine as well as award-winning ales. The sight, tastes and smells of the event, mixed in with a cracking variety of live music acts and a warm feeling inside, will satisfy all your senses at once.

Once again, Anteloup are joining up with local covers band Middle:6 to provide a mixed set of original and covers music. Doors for the event open at 5pm, with the guys taking to the stage from 8pm. More details on the event can be found at the Garage Chilwell website.

Lots has been going on since the last update - Belper Goes Green, Studio time and a forward look at this year’s Oxjam Beeston Takeover! Jul 21, 2019 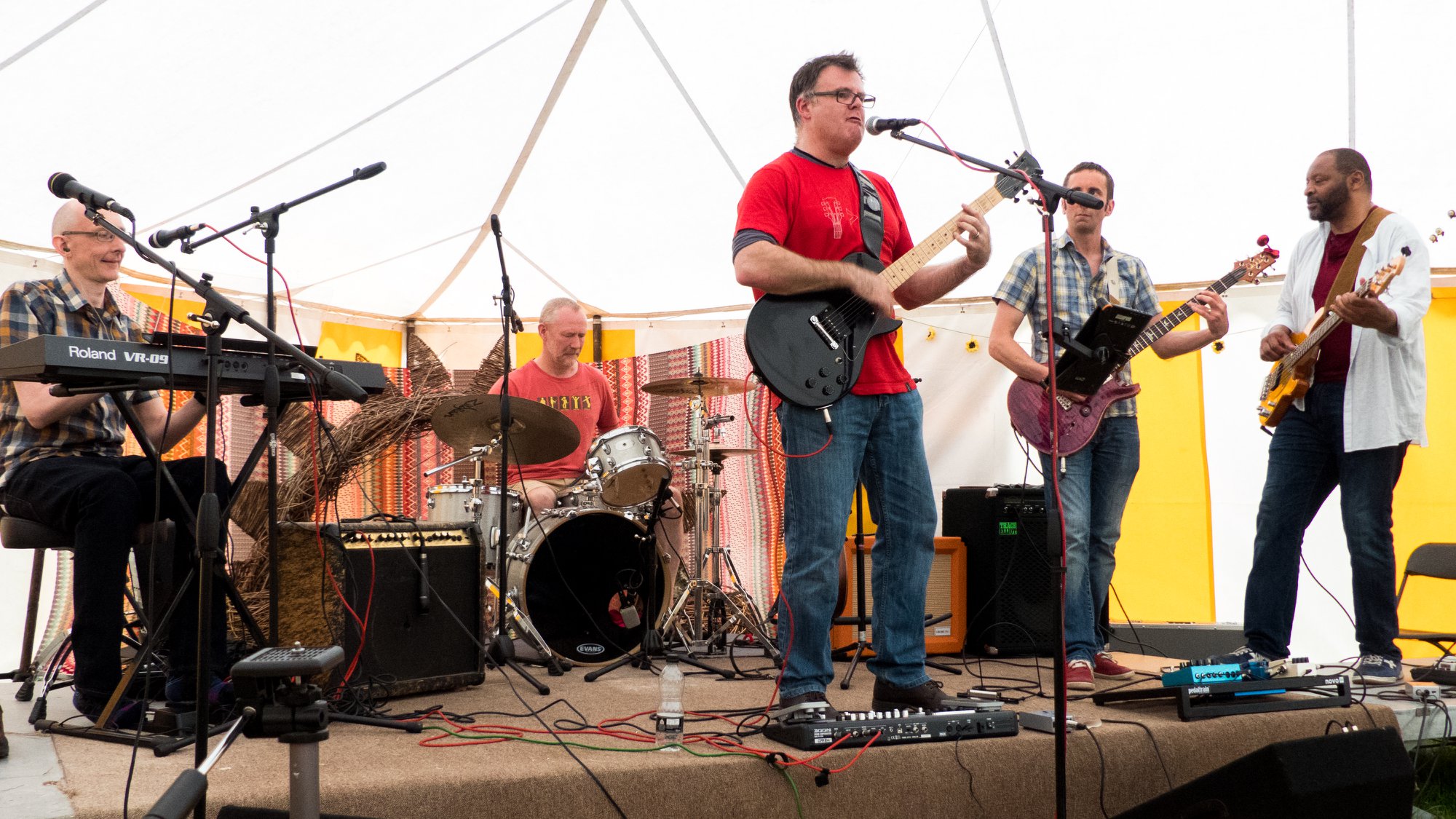 The Belper Goes Green festival ran over the 1st and 2nd June 2019 on the Belper Rugby Club ground in the small Derbyshire town, just a 30-minute drive up the A6 from Derby itself. It’s a fantastic event, focussing on renewable energy, climate change and the future protection of our planet. It also boasts 2 separate music stages, covering all manner of musical genre and styles. So, it was the perfect venue for Anteloup to join in and grace the crowds with their cross-genre approach to playing the stuff they like. A cracking mix of songs were performed, including old favourites like A Little Bit Like Kiss Me, to brand new material such as Little By Little. The weather threw everything it had at the festival and the tent was rammed, initially with folk trying to find shelter, but then by a wonderfully appreciative crowd who bobbed, clapped and danced throughout the set. The band were still buzzing the following Tuesday at their practice and are really looking forward to playing the event again. Luckily, Andy Sutton and Chris Martin were on hand to take some snaps and you can view them right here.

JT Soar Studios are a well established studio in Nottingham, who have had quite a number of established acts through their doors, including Sleaford Mods, Rattle and The Merryn Ashwell Quintet. Now they can add Anteloup to that list as the guys are in the process of recording their first 2 studio tracks there.

A day was spent laying down most of the songs, with just some finishing touches to be provided by Pete and Luis. The band have already had a sneak preview rough mix of the tracks so far and they’re sounding pretty damned good! Keep you eyes out for official releases before the end of the Summer.

Saturday 19th October is the Oxjam Beeston Takeover; an event that the whole band really look forward to. Not only just to play, but also to check out the staggering amount of local music talent who turn out to provide 12 hours of fantastic, top-quality non-stop music.

Anteloup are confirmed as playing and venue details will be provided as soon as the band have confirmation. 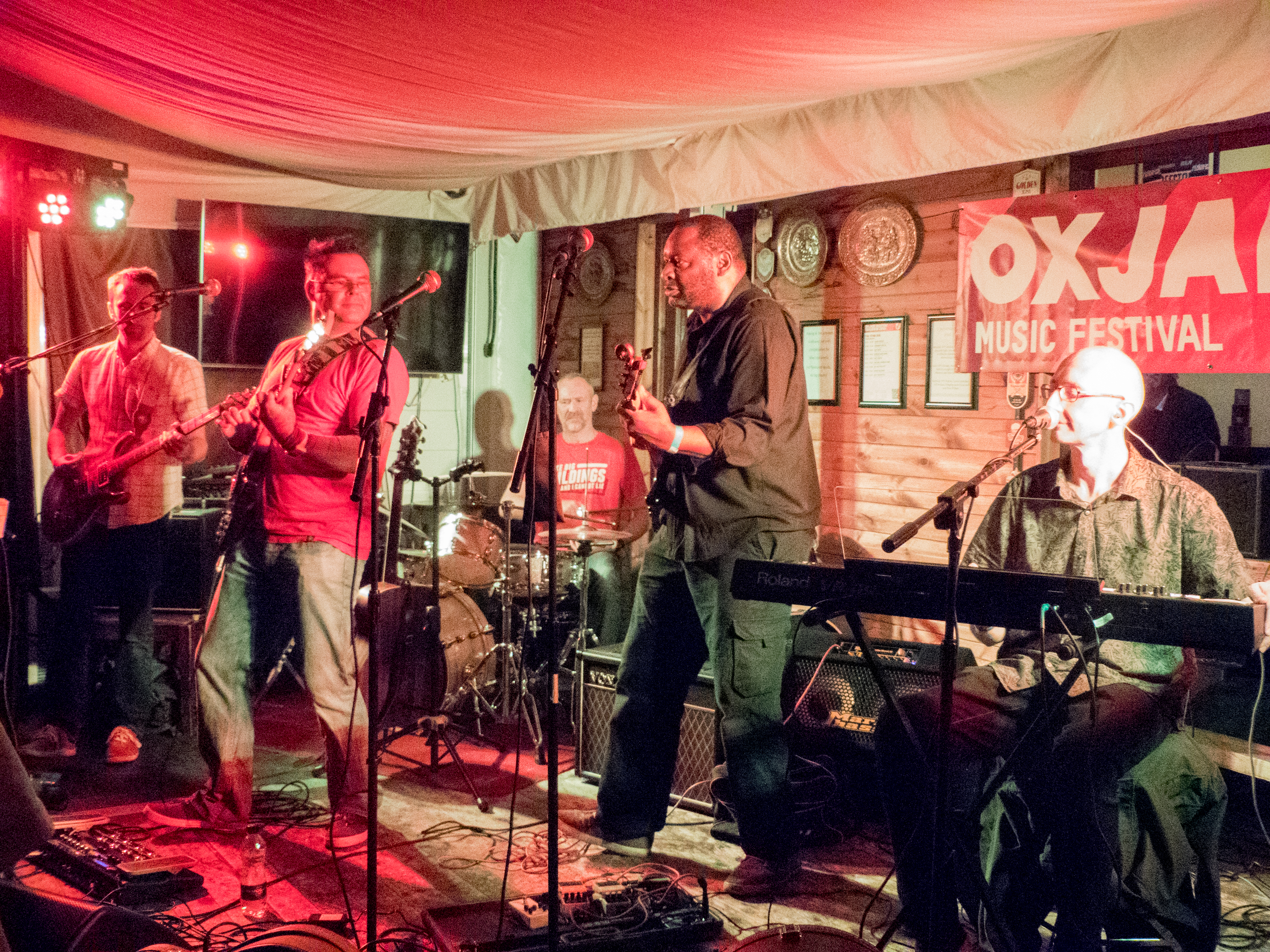 Saturday 13th October saw the Oxjam Beeston Takeover festival return and, once again, the guys played a barnstorming set for one of their favourite music events of the year.

The band have become regulars at Oxjam, playing such venues as The White Lion, The Crown and The Bar. This year they played at The Star Inn from 7.20pm.

This was the second time at The Star for Anteloup, although it was a first for their current line up, and they played to a packed room.

There were a couple of Oxjam firsts being aired alongside some of the band's more well-known numbers. 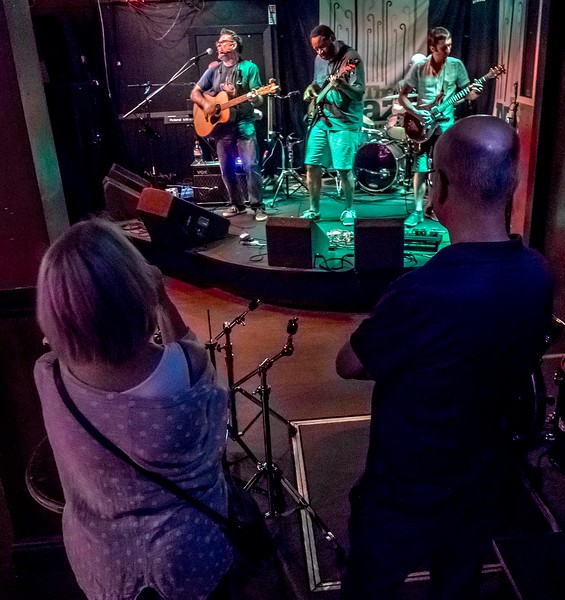 Anteloup played the popular Nottingham venue 'The Maze' on Tuesday 26th June, as part of the Notts In A Nutshell night, which aims to showcase new bands in the area. There were 4 bands on that night; 'Wreck', 'Blank Youth', 'Anteloup' and 'The Crazy Peace Of Mind.'

While the other bands were more of a rock genre, Anteloup's set seemd to be the busiest, drawing more of a crowd (albeit of a particular age) and getting excellent responses for each song.

The band also debuted a brand new song, Little By Little, which got a fantasic response and has since been promoted to the band's forthcoming EP.

Check out the pictures of the gig in the Photos section and be sure to follow the band on Twitter and Facebook for details of upcoming gigs and other band news.

Anteloup were really proud to take part in the Nottingham Busk Off Festival 2018 this year. Although Dave and Pat were not available for the event, they were there in spirit (actually, Pat was also there in person..) and the whole band re-worked some of their more popular numbers to work as acoustic-based, providing a set that could be played with the minimum of instrumentation, but still deliver the inimitable Anteloup sound.

Gary provided a rock-steady keys rhythm that kept everything in time, while Pete pulled off some pretty impressive guitar majesty on a borrowed acoustic.

"All I really had to do was turn up and sing!" Laughed Luis. "We were a little apprehensive at first, as we're definitely a 5-piece and really missed having Pat and Dave with us, but after the first song we got into the flow and just went for it. It was a great day, and a fantastic experience."

Check out the pictures from the Busk Off on the Photos page.